Dyspepsia | 8 Foods To Free Yourself From Dyspepsia (Indigestion)

In a simple word, dyspepsia is defined as experiencing difficulties digesting anything.

Dyspepsia may sound so unfamiliar, but I bet it rings a million bells when I say indigestion. Yes, dyspepsia is a medical term for indigestion.

It is a very common condition which occurs in both old and young. It is not gender-based. i.e. it occurs in the male and female gender.

It is sometimes confused with stomach ulcers, acid reflux, and Gastroesophageal Reflux Disease(GERD) because of their similar symptoms. However, one or more of these may be an underlying condition while one suffers from another.

Dyspepsia is caused by a lot of factors, which vary from one individual to another. Some of these factors include;

These foods and bad drinks trigger the dyspepsia effect.

While food is a contributing factor to some illnesses, it also poses some benefits in remedying some illnesses of which dyspepsia is not an exemption. This article has a list of these eight foods that will help alleviate dyspepsia. These foods are;

This tops our list of foods that help with dyspepsia. On a day when indigestion is bad, an apple can be a good solution to calm it and save you from hurriedly visiting the hospital.

Apple, a member of the rose family is a fruit containing a high percentage of Pectin fibre. It has a sweet taste and is sometimes sour.

in some varieties. Pectin is a dietary fibre that plays an essential role in improving digestion and in treating dyspepsia.

Research shows that daily consumption of apples also improves the digestive system. And this makes the saying “an apple a day keeps the doctor away” but I must add “even far away”.

Chamomile is a flowering plant belonging to the same family as the daisy flowers (Asteraceae).

It is a known old remedy for illnesses. It is rich in flavonoids and terpenoids. These phytochemicals contribute majorly to the medicinal roles played by chamomile.

You can brew a cup of chamomile and be sure to ease the stomach of dyspepsia discomfort. However, if you have an allergy to chamomile or even ragweed, you may want to consider other options and not chamomile.

Ginger is an Asian-originated flowering commonly used as spice and condiments. It is recognized for its strong aroma and its numerous health benefits.

It belongs to the family Zingiberaceae, the same family as turmeric. It is one of the top natural remedies for indigestion.

Too much stomach acid is a contributing factor to dyspepsia. A cup of ginger tea can help relieve indigestion as it has been found to reduce stomach acid.

While making the ginger tea, it is best to use fresh ginger because it still retains the moisture content and all the nutrients that should be contained in it.

Cut some ginger roots into slices and boil in water for some minutes, maybe five to seven. By then, you can be assured that the nutritive contents needed have been released into the water. You can add a few drops of honey, preferably.

Patients with ulcers and heartburn should however take with caution as it triggers the effects of these illnesses.

Right here is one of the world’s most acknowledged natural sweeteners. It is widely known for its naturally sweet taste and unquantifiable health benefits.

It is gotten from beehives and produced by honeybees.

It is used in the

Its extension of benefits to patients with dyspepsia is also an addition.

The viscous nature of honey slows down the movement of the stomach’s acid and eases indigestion.

It gives the best result as lemonade with ginger and lemon. One great deal about honey is looking out for the original so as not to worry about the consequences of the fake ones. Its sweet taste makes it easy to use.

You can also read this: 8 Must Have Condiments in Your Dishes

Carbohydrate classes can trigger dyspepsia, but this class also has foods that help with dyspepsia.

Rice is a carbohydrate-belonging food that is rich in fibre content and complex carbs.

Fibres are great absorbers of stomach acid and the complex carbs are just excellent for the digestive system.

Since too much stomach acid causes irritation and pain, rice consumption is an ideal way to get rid of dyspepsia.

There are different varieties of rice but the best one for indigestion is brown rice because it has the most fibre content of all rice varieties and is more nutritive than others.

Dates are chewy stone fruits of a date palm. It has a sweet flavour and serves as a nutritious snack.

Dried dates are usually with wrinkled flesh while the fresh ones have smooth flesh.

They are fruits rich in fibre, minerals, vitamins and proteins. Because of these and their alkalinity, they are a great remedy for dyspepsia.

They are also great for digestive health and can be incorporated into one’s daily diet but moderation should be employed as it can cause excessive weight gain which can lead to obesity.

They belong to the family “Rosaceae” and originated from Western Asia.

These qualities of almonds help dyspepsia. They are highly alkaline and neutralize stomach acid.

They absorb the stomach acid. They are considered healthy choices because they provide probiotics which are just perfect for improving the digestive system.

You can choose to consume the almonds raw or extract their milk. Whichever way you have decided to take it, it works perfectly for dyspepsia.

It is also called cider vinegar. It is the fermented juice of apple fruits that is extracted by squeezing the fruits. It can be prepared at home. Yeast may or may not be added, depending on choice. It has a sharp sour taste and has many health benefits and uses.

It is highly acidic and throws one into the pit of “how then does it work for indigestion considering the stomach acid itself?”.

Apple cider vinegar is not consumed in its raw form, especially for alleviating dyspepsia. Just a few drops of it are added to a glass of water. Patients that have suffered from dyspepsia testified to the magical work of cider vinegar for indigestion.

Recall that pectin fibers are present in the apple, which is the primary ingredient of the vinegar. Since the vinegar is fluid, it makes sense for it to work better and faster than the raw apple fruit.

check this: 5 Ways to Remove Slime From Your Carpet

There’s absolutely nothing wrong with meeting doctors or visiting the hospital but there’s money, time, energy and even life to save when we learn to make use of what we have.

You can also avoid worsening situations. If you suffer from dyspepsia, you can try out any of these foods to relieve yourself before beeping your doctor or rushing to the hospital. 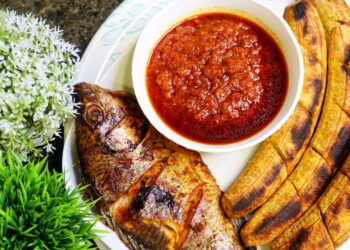 Boli or Bole is a popular Nigerian street food made by roasting plantains, and it is popularly known among the...

11 Cereal Nutrition Facts You Must Know | Home and Edibles